Closed Door or Door of Opportunity 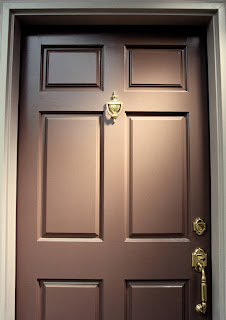 What do you see in this picture? Is this a closed door or a door of opportunity?

John Maxwell tells the story of two shoe salesmen who were sent to a remote Island to sell shoes. After arriving, the first salesman called the home office back in Chicago and told them that he would be returning the next day because no one on the Island even wore shoes. The second salesman arrived and immediately noticed the same thing. He too called the home office in Chicago. But instead of telling them that he was returning tomorrow he told them to send 10,000 pairs of shoes because everyone needed them.’


For over two years now, all we have heard about the need for change. (Actually, we are always hearing this in one form or another.) It was a major theme of our last presidential election. As was promised in the campaign change has come. I will let you debate the results of the change as if it has been positive or negative for our country as a whole.

In our own Southern Baptist Convention, the need for change has also been raised. At the 2009 SBC Annual Meeting is Louisville, Kentucky a Great Commission Resurgence Task Force was elected to make recommendations to the 2010 Annual Meeting in Orlando, Florida on changes that need to be made for us as a convention to carry out the Great Commission in a more effective way. The Final Report has now been made in preparation to its presentation in June. You can see the report at the following web site:
http://www.pray4gcr.com/reports/a-great-commission-resurgence/

A short five-minute video for showing at your church is found at the following web site:
http://vimeo.com/11339928

What did you see in the picture above? I saw doors of opportunity! The world inside and around your church is changing. The realities of how an Association, the State Convention, the Southern Baptist Convention, and its Agencies will function are changing. We must understand those realities if we are going to be effective in carrying out the Great Commission in this generation in which we live. Your church will make decisions today that will either embrace the changes, like the salesman that asked for 10,000 pairs of shoes, or go home because you missed seeing the opportunity. Let’s sell some shoes!
Posted by M. Keith Williams at 12:50 PM